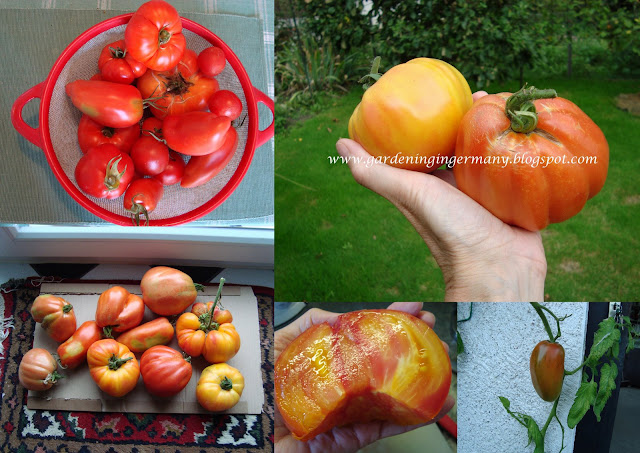 Having been delinquent once again about keeping up my blog, with such feeble excuses I won't even name them, I want to finally post a report on this year's very pleasing tomato harvest.

As I reported in a previous post, I have several varieties of family heirloom tomatoes from which I derive my own seeds each year. This year, in addition to these home-propagated beef, peach, and roma tomatoes, whose correct names are lost in history, I also purchased supposedly disease-resistant seeds from a commercial seed company (Sperli's Delizia F1 hybrid), and some bush tomato seeds from an organic seed cooperative ("Balcony Star").

I've been having a good harvest from all 5 varieties, but it has to be said that my self-propagated tomatoes simply taste better - remarkably so. The bush tomatoes have been producing a large number of smallish round salad tomatoes for weeks, pleasant-tasting but bland. The hybrid tomatoes are healthy and meaty, but also not really better-tasting than local tomatoes purchased in season from the green grocer.

None of my tomatoes have been affected badly so far this year by blight, with the exception of the bush tomatoes. This hasn't, however, daunted them in producing prodigious amounts of fruit. Here one of the bush tomatoes, on our fifth floor patio, i.e. without contact to other blight-carrying plants (you would think): 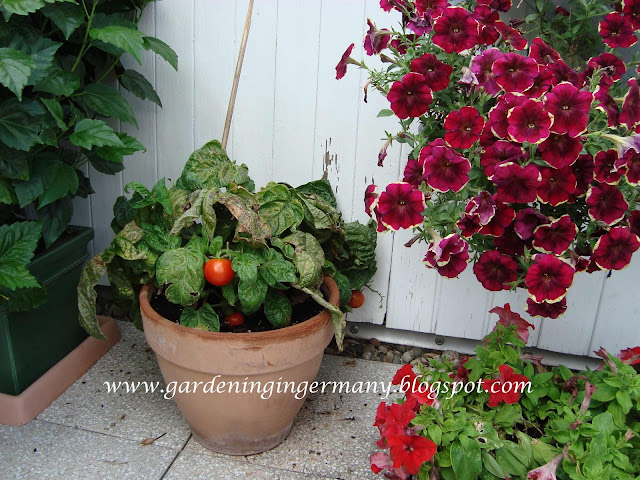 The yellow "peach" heritage tomatoes win hands down as the family's favorite tomato. I am worrying a little, though, that they might be losing their specific characteristics through cross-pollination, and will be doing some research on preventing that for the future. Last year, my peach tomatoes were much "yellower" than they are this year. 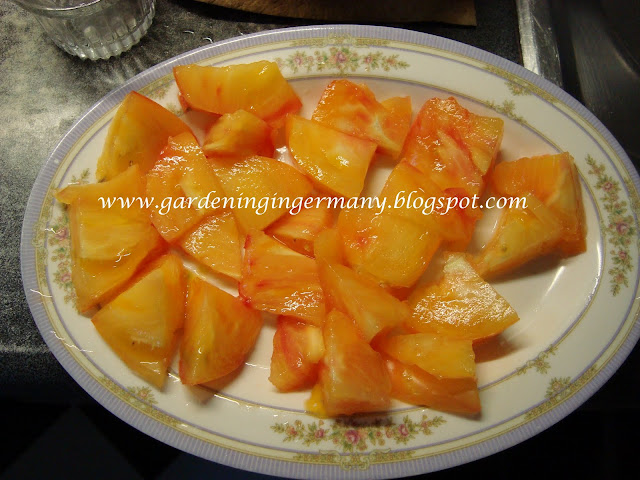 Peach tomatoes from this year's harvest (the bottom two rows in the dish), with more red in them: 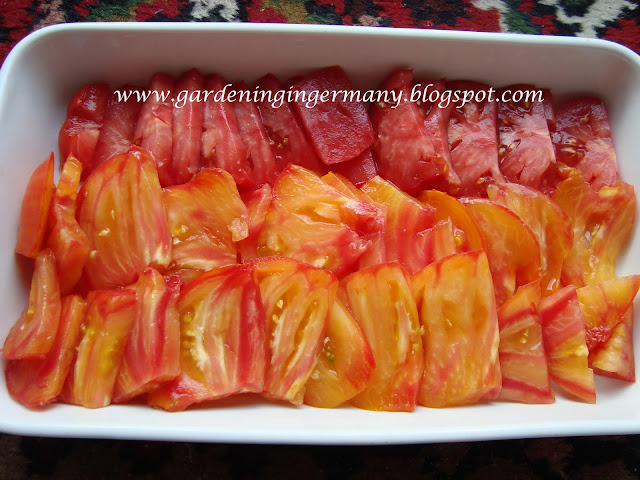 Still, they taste fabulous. Runner-up for favorite tomatoes are the roma-style heirloom tomatoes we call "paprika" tomatoes. They cut like butter and are mild with firmer flesh and little juice.

In the photo below from left to right: peach heirloom tomato, paprika heirloom tomato, Delizia F1 hybrid, Balcony Star bush tomato. My heirloom beef tomato has pretty much finished producing fruit this year, and we've eaten them all, sorry. 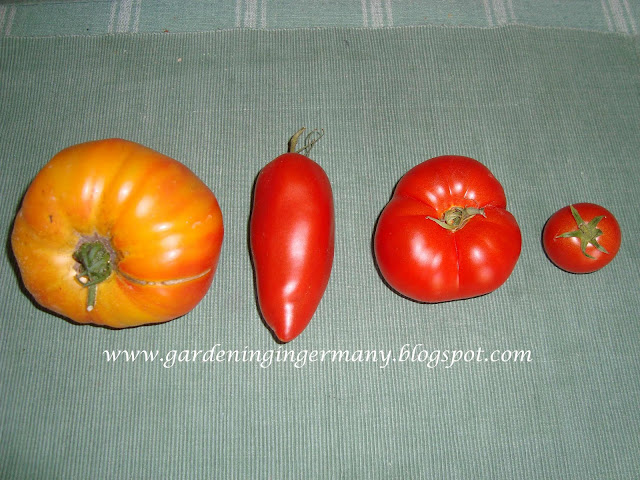 One new problem has presented itself this year. For the first time, we have a deer(s) in the garden! This is terrible! I've seen them twice when I've gone to the garden early in the morning, and see their tracks and droppings around the things they like to eat most: roses, lettuce, and tomatoes. In fact, they've pretty much ruined some of my roses by constantly biting off the buds and tender leaves and shoots. We've conferred with our neighbors in the allotment colony about this and reported it to the administration. The outer periphery of the allotments is protected by a deer-proof fence, but the gates are open during the day and the garden colony is large enough that once in, they can easily hide during the day.

So we tried various things such as hanging streamers of red and white cordoning at strategic places, etc., to no avail. Finally I resorted to wrapping or covering all the tomato plants in garden fleece, i.e. "bagging" them. This has been very effective, but doesn't look too great. It was fairly easy to do since all my tomatoes are in pots under the eaves to help prevent blight. 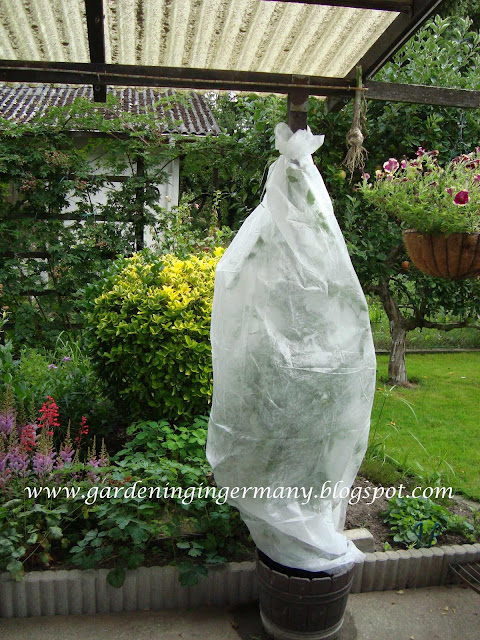 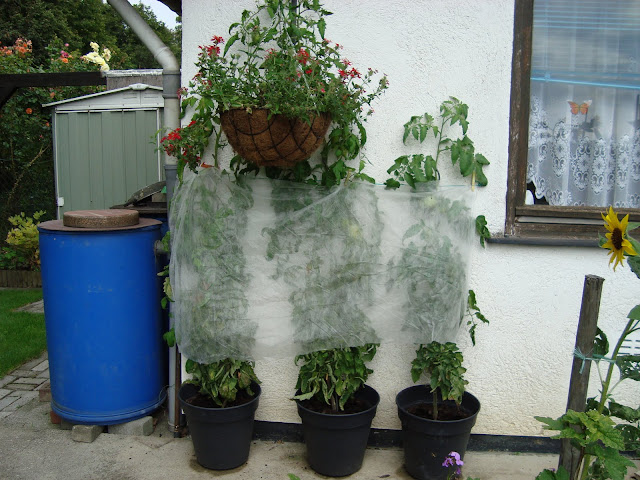 It could be that bagging the plants has reduced the harvest somewhat, but it's hard to tell.

Thanks for all your comments on my last posts and happy harvesting to all of you fellow vegetable gardeners.
Posted by Barbara at 3:21 PM 16 comments:

Both Love-in-a-Mist (Nigella damascena) and  Dame's Rocket (Hesperis matronalis) are flowers I tried after reading that they are usually left alone by slugs. Into my second summer with them I can confirm that this is true.

These flowers are touted as cottage garden favorites, and have been grown in European gardens for hundreds of years. That and the fact that they are native to Europe appealed to me. Love-in-a-Mist (in German: Jungfer im Grünen) is an annual, and Dame's Rocket (in German: Nachtviole) is usually called a biennial or short-lived perennial. In my garden, Dame's Rocket only survived one of our mild winters, but both plants have self-seeded very generously.

In fact, in the meantime I've learned that Dame's Rocket is regarded in some U.S. states as an invasive species, although in my experience, Love-in-a-Mist deserves this honor much more! I've been battling Love-in-a-Mist all spring, literally ripping out hundreds of offspring from the original 10 or so I planted from seed last year. Here it is crowding out some of my herbs. One place it didn't invade were the rows of winter onions you can see in these photos, so it must not like their company. 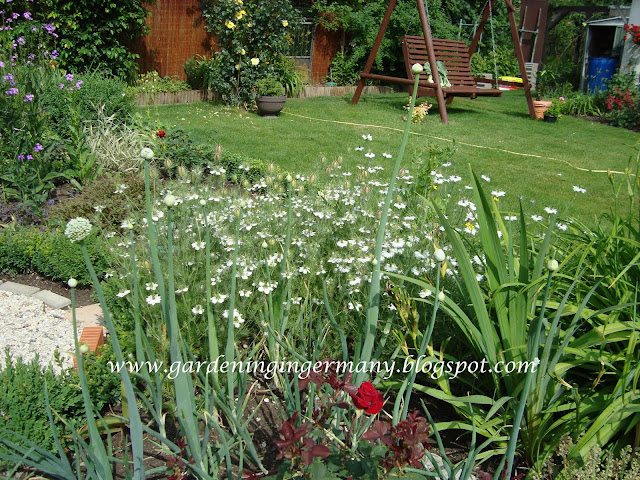 The photos above were taken at the end of May, but you can already see the myriads of seed pods being formed.

The flowers and the foliage of this plant are very delicate and lovely, and so are the seed pods for that matter. They make great vase flowers. This makes it hard to rip them out! Another observation I've made is that whereas the original variety I planted was "Miss Jekyll", which has true blue blossoms, all the self-seeded plants bloomed white and I have no more blue at all.

Dame's Rocket also self-seeded, but not anywhere near as prolifically as Love-in-a-Mist, although from the one single plant (purchased in a nursery and planted the fall before) I had last summer there were at least 20 offspring - but not 200. However, the new plants this spring were not as lovely as the original pink-violet plant. The blossoms were not as showy and long-lasting, the plant had less stems, and the color was not as intense. I found a photo showing my single plant of Dame's Rocket last summer, and the second photo shows a couple of its offspring this year. I think you can tell the difference.

I tried digging up a few plants of Love-in-a-Mist and transplanting them or potting them for the balcony - that didn't work. They didn't survive being dug up well at all. Dame's Rocket, on the other hand, was very easy to transplant, although as was the case with all the self-seeded plants, they just weren't as attractive as the original nursery plant.

Conclusion: I will definitely continue to have both these flowers in my garden as they are slug-resistant. However, in the case of Love-in-a-Mist I'll be cutting off the seed pods before they can self-seed, and will grow it from purchased seeds again next year in order to get the lovely blue blossoms. And although self-seeded Dame's Rocket is easy to manage,  I think I'll invest in plants from the nursery again next year.

Another observation: bees and butterflies just love the Love-in-a-Mist.
Posted by Barbara at 4:53 PM 24 comments:

This post is part of my series on dealing with the slug problem. In addition to putting up barriers, I'm concentrating on growing plants that slugs avoid.
One of my favorite flowers is columbine (Aquilegia). It has perfect timing, blooming right after the tulips and other spring bulbs have started to look seedy, and before many other summer flowers have opened. It is native to all temperate continents of the Northern Hemisphere, and was first mentioned in Germany, for example, by the famous mystic, healer, and gardener Hildegard von Bingen in the 12th century.

Columbine is easy care, self-seeding without being obnoxious, and beautiful in almost any setting. It's traditional in cottage gardens and can be found in almost every garden in Germany. I've hardly had to purchase any, since it keeps reappearing at various places in the garden, sometimes I suspect blown in from neighboring gardens. I've separated clumps and transplanted them, and I've traded with other gardeners. Right now, at the beginning of May, the garden is full of this elegant flower.

AND - slugs don't touch it. Go figure, since it looks so tender and scrumptious.

There are many varieties of Aquilegia. Its many vernacular names reflect just how widespread and anchored in garden lore this flower is. In English I found granny's bonnet, culverwort, rock bell, rock lily, and honeysuckle (Aquilegia canadensis, not to be confused with some varieties of Lonicera also called honeysuckle). We had Aquilegia in our garden where I grew up in Minnesota, and called it honeysuckle. There are sweet drops of nectar in the blossom spurs, certainly the source of this name.

In addition to the most common German name, Akelei, other names used include Elfenschuh (elf shoe), Zigeunerglocke (gypsy bell), and Narrenkappe (fool's cap).

Knowing how hardy columbine is, last year I bought an almost dead-looking plant from the bargain shelf of the garden center, and have been rewarded this spring with this beauty: 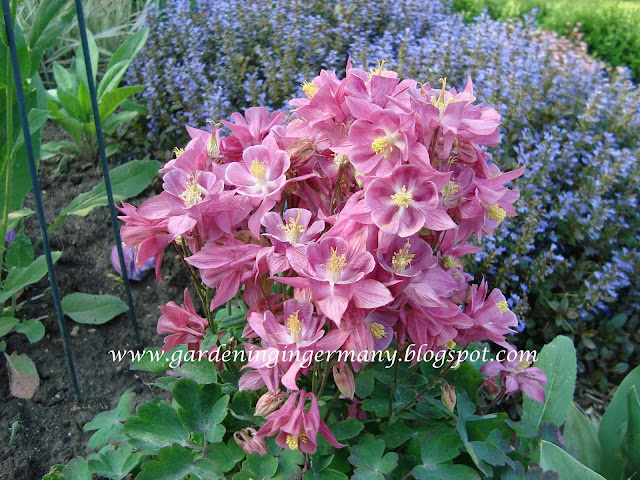 This one is low, but I have a similarly-colored variety that gets much taller and has double blossoms. 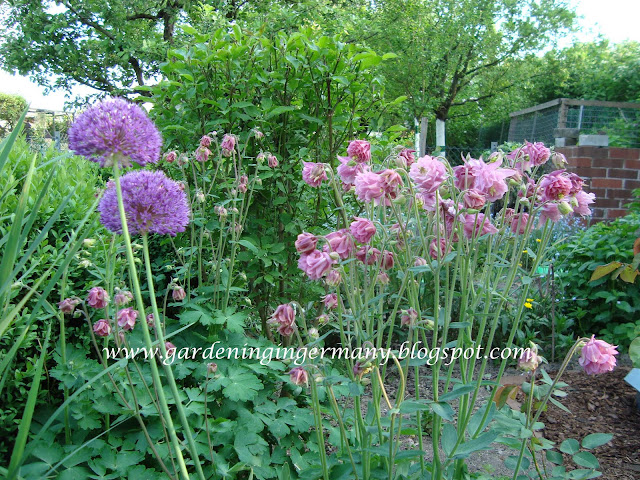 Columbine comes in colors ranging from white and pale pink to lavender and red through to dark purple. There are even some cultivars in shades of yellow, but I've never seen one. The kinds I have vary in height between about 30cm and 70cm (12 - 30 inches). The blossoms can be single or double, hanging or upright, and grow at the end of slender stems, sometimes widely spaced, sometimes in clusters.
I just love this tall, pale pink one combined with a lower, blue variety and bleeding heart (Lamprocapnos spectabilis, another lovely slug-resistant flower) in a shady corner of the garden. Aquilegia grows in both shade and sun, but seems to prefer at least partial shade, judging by where it sows itself most copiously. 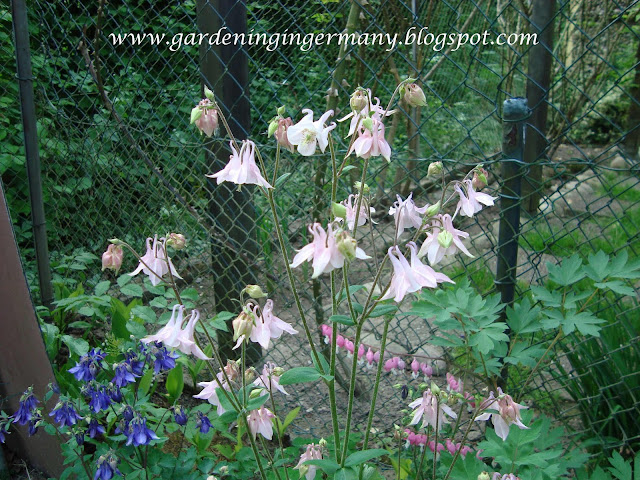 The tallest columbine I have is white, and truly looks bell-like. I've had to rip some of it out since it was crowding the saxifrage. 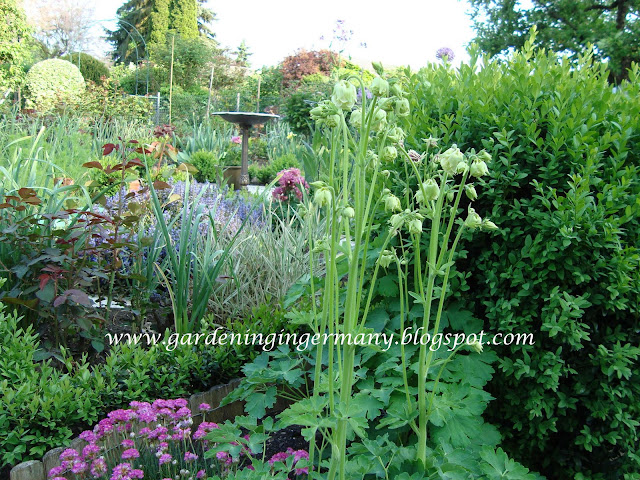 The following photos show off the various styles and colors of Aquilegia. 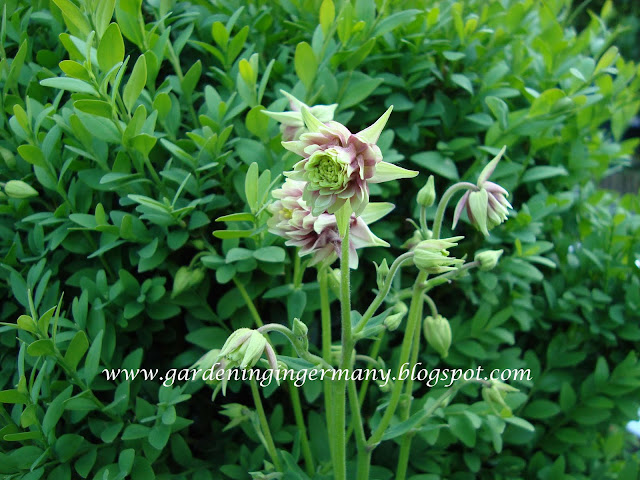 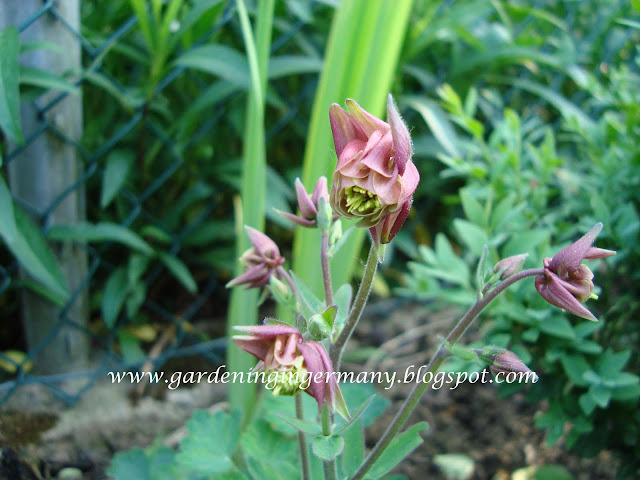 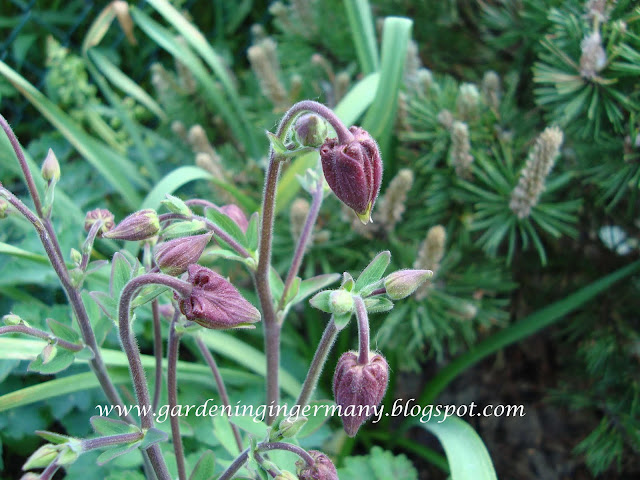 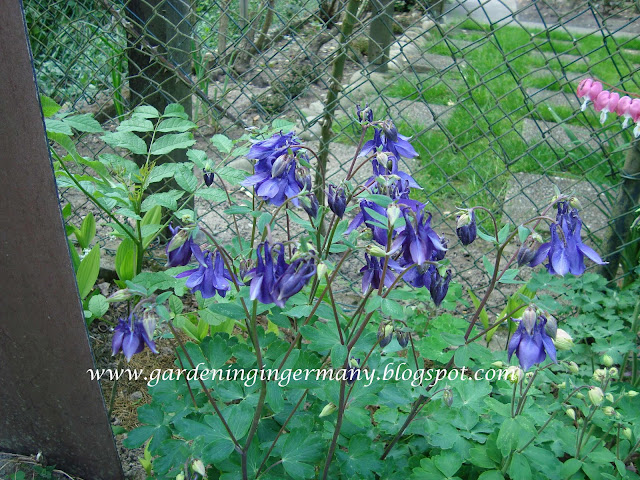 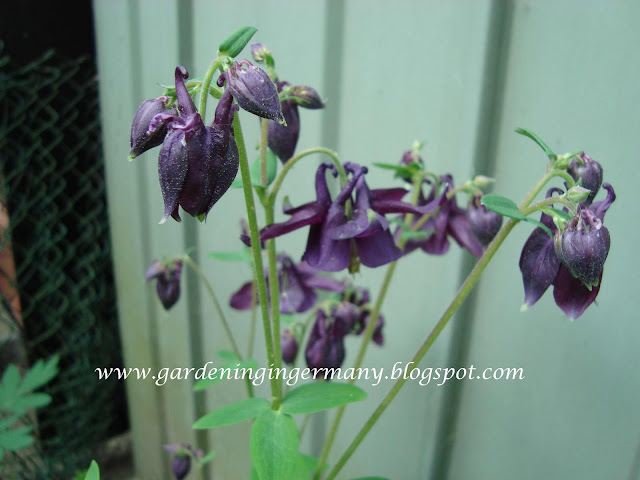 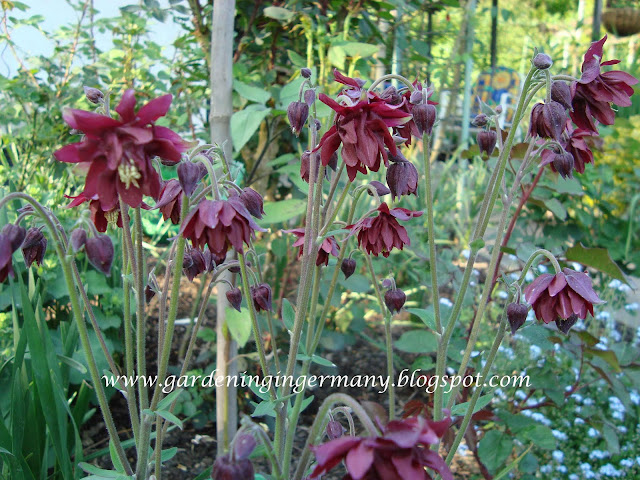 So if you don't have any yet in your garden, go right out and buy some of this versatile perennial. They can be planted or sowed right now.
Posted by Barbara at 6:33 PM 15 comments: