One of Mannheim's hallmarks is the Augustaanlage (Augusta Avenue), a beautiful long plane tree boulevard leading from the eastern border of the city to the water tower in the city center. Here's a photo giving a partial view taken in happier days in the summer (photo taken by Kai Demut and uploaded to www.meinestadt.de), although even in this photo the trees, due to radical pruning, are not what they once were. 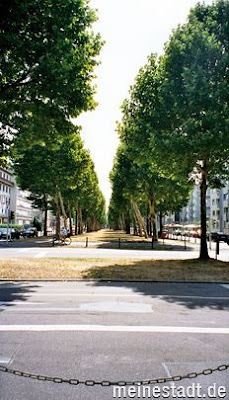 Look here if you'd like to see an areal view in google maps.

The plane trees (platanus orientalis, known variously as planes, plane trees, or sycamores) are around one hundred years old and form two double rows with a broad swath of land in the middle, stretching for almost a mile altogether. It is believed to be the longest tree-lined boulevard leading into a city in Germany, possibly even in Europe. For visitors entering the city from the Autobahn, Augustaanlage is both calling card and first impression. So it's no wonder that Mannheim's citizens identify with this avenue and that there is lively discussion any time the city fathers decide to do something new with it.

Here's a view giving an impression of the length of the boulevard, which ends at Mannheim's art deco water tower in the middle of a beautiful park with large fountains: 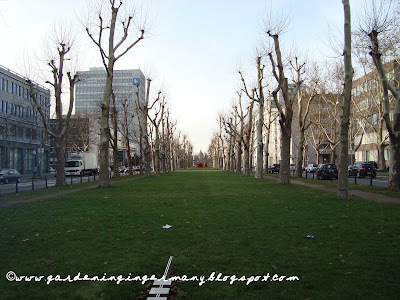 In the course of the years a modern sculpture garden has been installed in the boulevard. Here's a shot of some of it taken last week in the snow (click to enlarge): 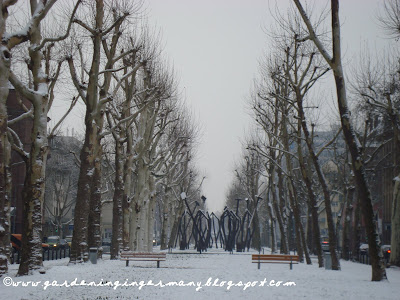 Also, a few years ago there was a successful drive for donations to finance the planting of flower bulbs between the trees. My husband and I now sponsor one square meter of bulbs. Some of them are just starting to come up - here's a photo taken yesterday of what just might be my square meter: 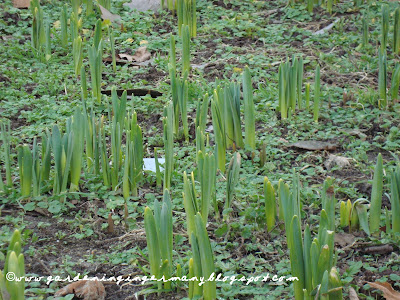 And here's what it looks like in the spring (photo taken by tessy and uploaded to virtualtourist.com): 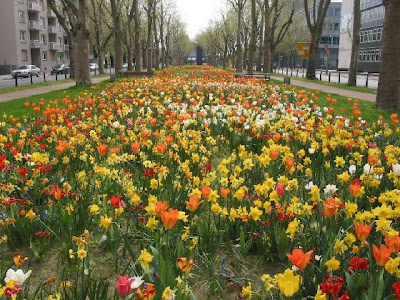 Another interesting activity is the planting of one section with mats of wildflower seeds instead of grass and bulbs. Even in the winter this section is still interesting: 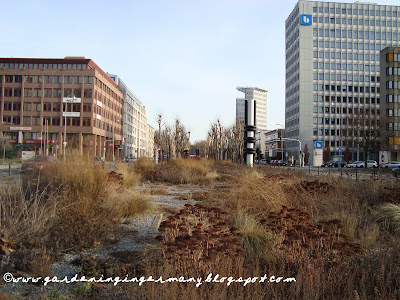 As you can see, the trees in this section are missing. And that's the problem: they are dying. In the other photos you may also have noticed that the trees don't really look like typical planes. The bad news is that an expert commission has determined the trees are so damaged that they've all got to go. About 25 years ago the widespread damage was first discovered, but instead of chopping them all down and replacing them, it was decided to radically prune them to save weight and prevent branches from falling. The first time I saw them do this - and they've done it four times altogether in the last 25 years - I was first appalled and then amazed at how beautifully the trees branched out afterward. But in principle pruning is not good for the health of the planes. Of the original 450 trees, around 300 remain, since some have been damaged by traffic; by the two wars they've gone through; and just generally by vehicles compacting the earth; extensive building along the boulevard; gas, telephone and water lines being laid; and also by generations of dogs. When the boulevard was originally built, it was actually a park with promenade outside of the city, and there was no road along it and no buildings.
Here's what the plane trees used to look like. This shot was taken in one of the crossroads of Augustaanlage, many of which also are lined by planes, fortunately not yet damaged. You can imagine how lush this looks in the summer. 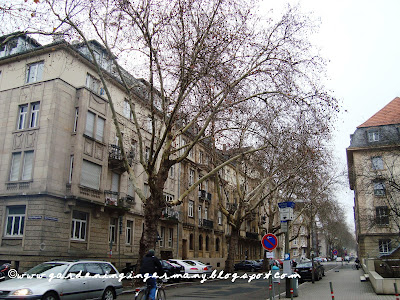 So doomsday is now here. Last night I attended a citizens' meeting at which city officials and experts explained the situation and presented their plan. There was a lot of discussion, and also spontaneous offers of citizens to finance a tree (3000 Euros each)! The plan is to remove all the trees successively in the course of the next four years, and to once again plant plane trees in four rows, but to place the outermost row a little further from the street, and the trees a little farther apart than they are now. A large amount of the earth they are planted in will be replaced. The whole thing will cost around 4 million Euros. And there are plans to make it more pedestrian friendly, perhaps including the monument to Carl Benz at one end in a more pleasing way. Carl Benz invented the first automobile right here in Mannheim, and many people think the monument should be less dominated by traffic and parking lot (although arguably appropriate since he brought it all upon us). Here's the monument: 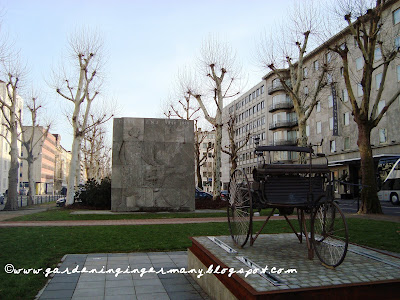 Here's another impression of the monument's location at the end of the boulevard. It's that square slab in front of the water tower (click to enlarge and you can see that it's practically in a parking lot). BTW we live a block from where this photo was taken. 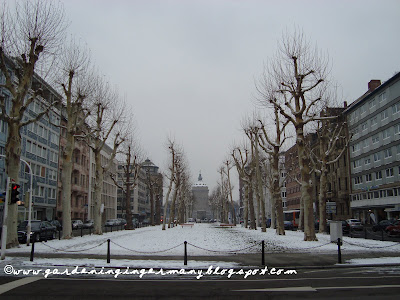 For any skeptics, three slices of an already felled tree were on display at the meeting. They are rotting from the inside out. 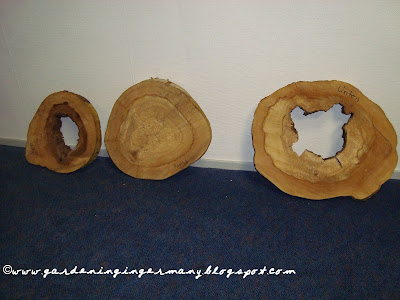 The new trees will be between 7 and 9 meters tall when planted, so that it won't take too long for it to look like a tree-lined avenue again. Full-grown trees can reach 30-50 meters. The experts hope that the new generation of trees will live longer than a hundred years. It is planned to leave them unpruned after initially training them to begin branching out at a sufficient height to avoid conflicts with vehicles.
For those who understand German, here's a short film produced by local television (Rhein-Neckar-Fernsehen) on the subject.
God willing, there at least won't be another war in the near future. Members of the European Union have now managed to avoid armed conflicts with each other for 65 years. I read that's the longest in the last 2000.
Posted by Barbara at 3:34 PM